How a Bulova Accutron landed on the moon, and stayed there.

Listen, while I spin a story about the coolest watch ever made. A watch that turned its back on 700 years of technology and went its own way. A watch that made it to the moon.

A watch on the bleeding edge of the unforgiving blade of technology that cuts through history to make progress. The Bulova Accutron.

It's 1960. Kennedy and Nixon face off in presidential debates. The Civil Rights Movement is in full swing. Tensions between the US and Soviet Union are on the rise. We're on the cusp of a technological revolution. The particle accelerator at CERN switches on. The first laser is demonstrated. Theoretical computer networks are proposed which will eventually pave the way for the internet and web. Satellites are launched around the world as the space race becomes an important part of the Cold War.

The way any timepiece more complex than a sundial works is to take a source of power, and release it little by little in regular intervals. Some early clocks used water, but about 700 years ago a mechanism was invented to gradually let a weight down or uncoil a spring in measured little jumps instead of all at once. It's called an escapement.

If you get the balance just right, those little jumps can be used to drive a chain of cogs that can turn hands, and that's a clock. Every clock, in fact.

Walking down a New York high street on that day you might have been one of the first people for 700 years to see a clock working without an escapement.

A vintage Accutron advert from mybulova.com

That's because unlike anything that came before, it doesn't use 13th century technology. It broke away from a fundamental assumption in watchmaking and discovered something new. Central to the Accutron is a tuning fork, vibrating 360 times a second, producing a low, quiet hum. It turns out that if you attach a magnet to the tuning fork, you can affect an electric current. Hook that up to the newly-invented transistor and you can keep time. Accurate time. Accutron time.

You could say that Accutron tells the time using sound, but in fact the sound is a byproduct. It tells time by vibration. Every time the tuning fork vibrates, it pushes against a tiny wheel, 2.4mm across with 300 teeth each a hundredth of a millimeter high. That wheel makes a microscopic advancement, 38 million times a day, to drive the second hand of the watch in what looks like a perfectly smooth sweep.

Measuring vibrations is something NASA were interested in too. In 1969 they were ready to send the first humans to the moon in Apollo 11. Neil Armstrong and Buzz Aldrin set foot on the surface of the moon wearing Omega Speedmaster mechanical watches, the type that still used an escapement. But they also carried with them EASEP. The Early Apollo Scientific Experiments Package. 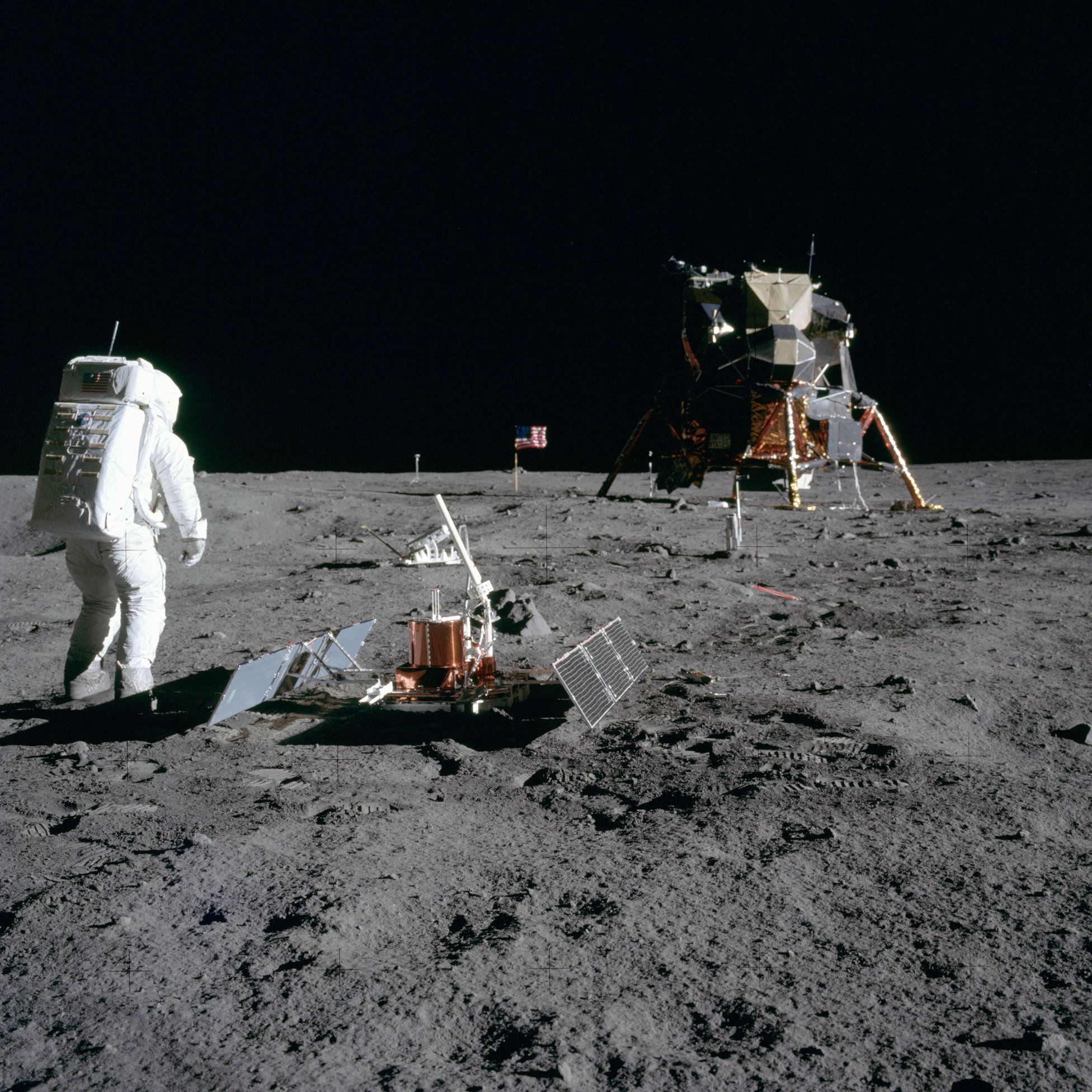 EASEP consisted of two experiments, LRRR and PSEP. LRRR is a mirror you can fire a laser from earth at to get precise distance measurements. PSEP is a much more complex package to establish 2-way communications with the moon, and to record evidence about the geology of the moon, including measuring seismic waves.

That's right. PSEP listens to moonquakes. And on board PSEP: a Bulova Accutron timer. 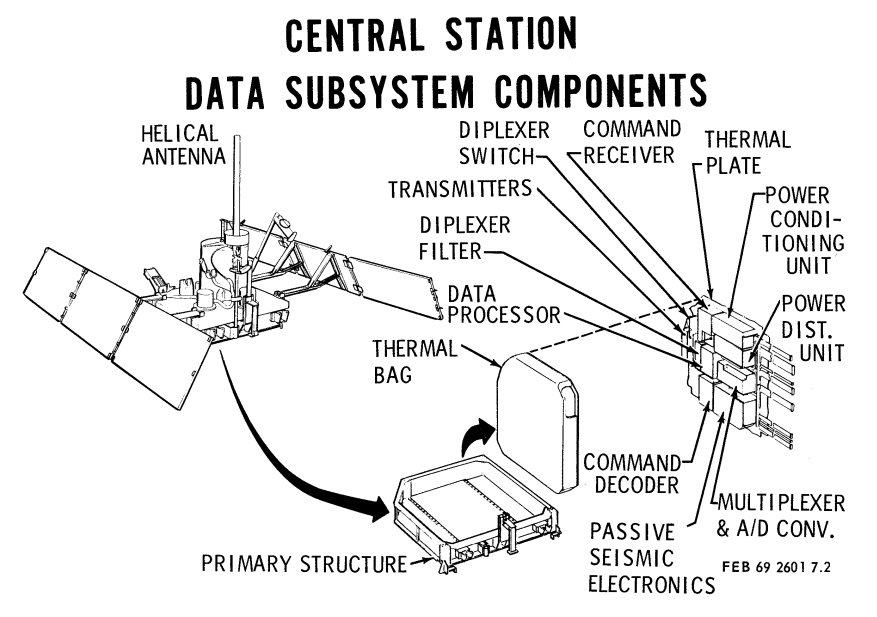 Between the Diplexer Switch and the Command Receiver is an Accutron. EASEP Familiarization Course 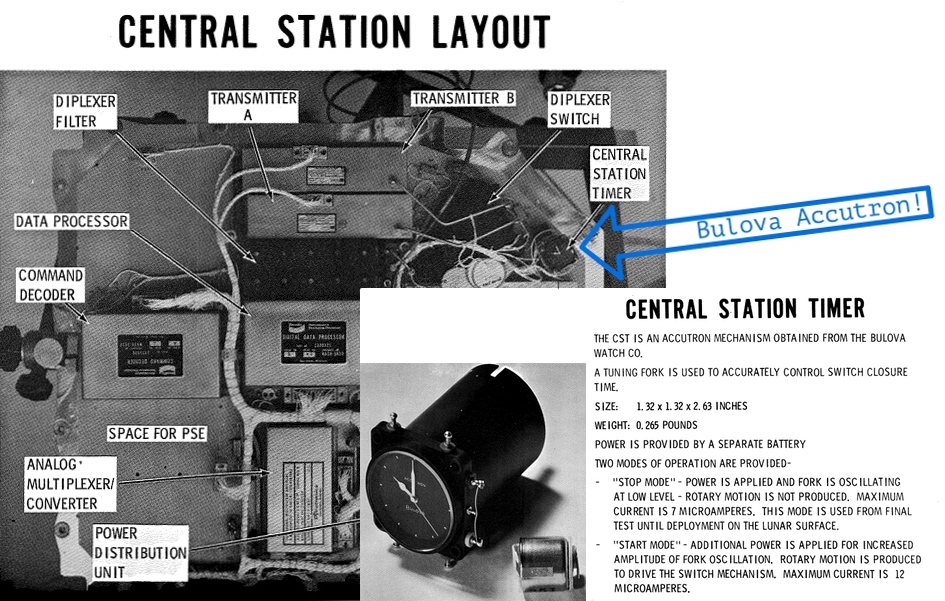 A photograph of the Bulova Accutron inside PSEP. EASEP Familiarization Course

That means that right now as you read this, there's an Accutron on the moon. Not only that, but one that Buzz Aldrin put there during Apollo 11. That places Accutron at an historic moment, on near equal footing with the legendary Omega Speedmasters. To some it may even feel more prestigous, being part of the actual lunar science experiments, and the first timepiece placed by human hand on the surface of the moon.

The movement inside these Bulova timers is exactly the same 214 caliber as in the Accutron wrist watch. And the seethrough dial of the Spaceview model is a joy to look at on your wrist. It's hard to convey the depth of the movement, seeing it in 2d on a screen or in print just doesn't compare. In person it looks like a miniature sci-fi city on your wrist, a sculptural testament to doing things differently, to seeing beyond the norm, and to reaching beyond, in giant leaps.

There's more to the Accutron story - worn by Elvis, used in the SR-71 Blackbird, favoured by Pompidou Centre architect Richard Rogers - but for me, being used in Apollo 11 was their crowning glory. By 1969, Accutron had enjoyed nine years of being the only truly modern wrist watch movement. Bulova must have felt on top of the world. But all that was about to change. 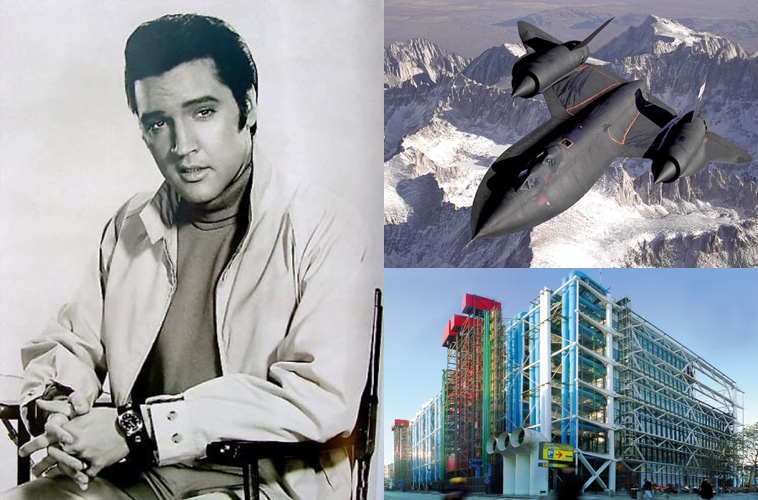 Accutron: the unlikely link between Elvis, the Pompidou Center, and the SR-71 spy jet.

On Christmas day 1969, five months and one day after Apollo 11 returned to earth, Seiko unveiled the Astron - the world's first quartz watch. Cheaper, smaller, more reliable. The 'quartz crisis' as it became known disrupted the watchmaking industry in a bloody coup. From a height of 1,600 companies in 1969, Switzerland lost over 1000 in the following 15 years, and quartz now lives in every electronic device from your phone to your microwave. Accutron hung on till 1977 amidst dwindling sales, until Bulova and everyone else who survived pivoted to quartz. The soft hum of the metal tuning fork fell silent, and became a curious, almost forgotten footnote, a little technological dead-end that burned bright for a few years and was then eclipsed, victim to the same merciless blade of technology it sought to wield.

When I look at my Accutron I see human ingenuity, scientific exploration, the boldness to challenge the status quo, and a future that never quite happened.

And that's why it's the coolest watch in the solar system. 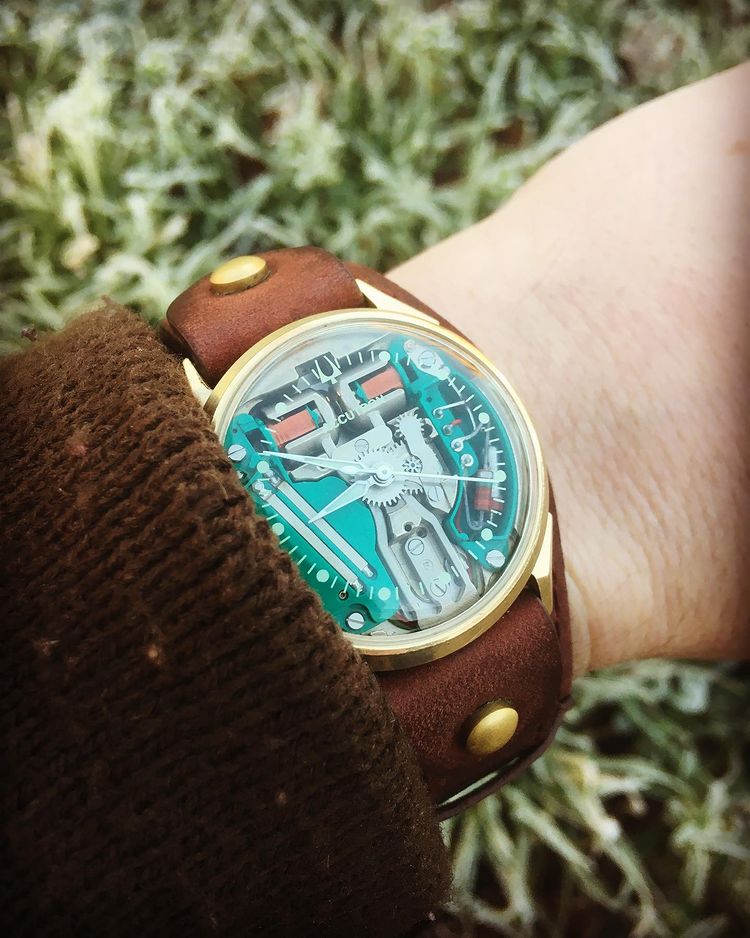 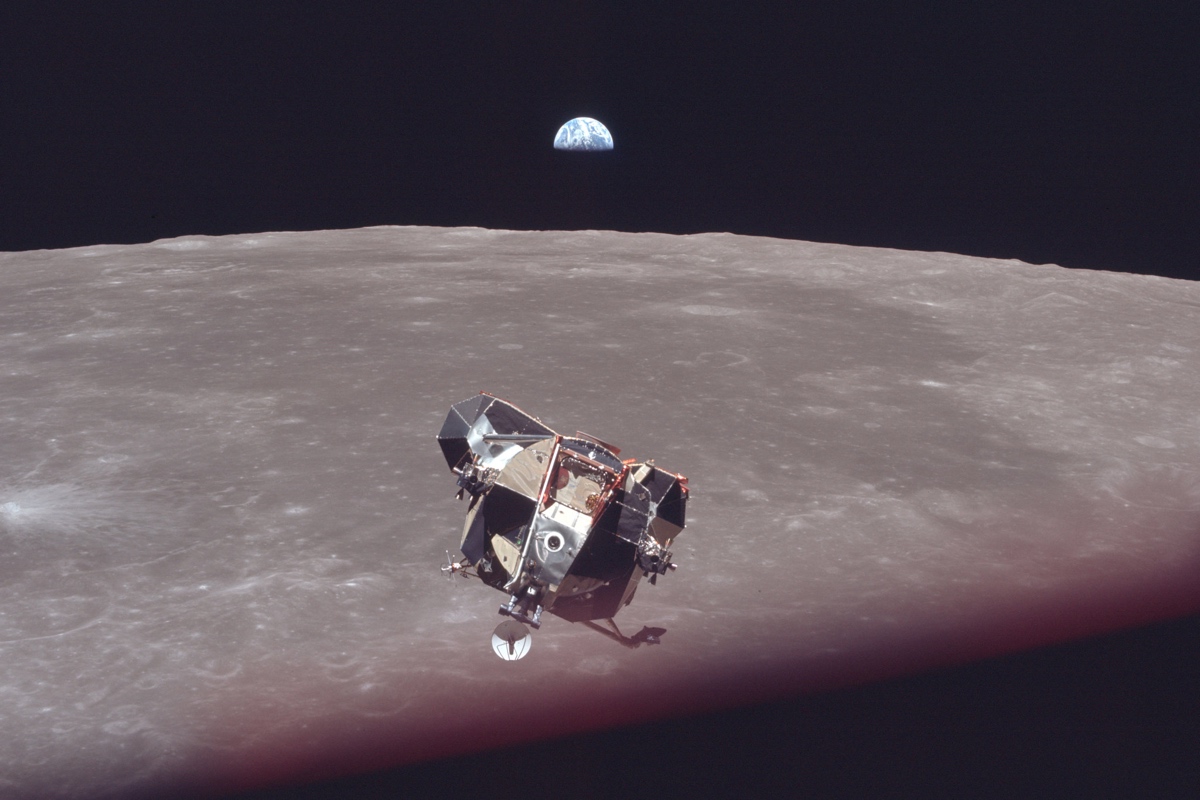 Apollo 11 descends towards the surface of moon carrying 2 humans who will return, and 1 Accutron which won't.

One thing you should know is that most Accutrons on the market are 'conversions' i.e. genuine Accutrons that started out life with a regular dial in front of the movement and with different hands. My own shown above is such an example. A seller will remove the dial exposing the movement underneath, fit new hands and crystal, and sometimes will adjust the movement to run better with a modern battery. Worth asking the seller exactly what work has been done. If you're seeking a truly original Accutron then you must do plenty of research into what case shapes were originally available as spaceviews, and what particular movement styles were around at which dates, to make sure everything matches up.

Remember that these are vintage pieces and will come with quirks. They all hum when put to your ear, but my first Accutron also had a loud whine that you could hear from a few meters away. That was not acceptable to me, so it was returned. My 1969 also whines but it's barely perceptible unless my hand is close to my ear or the room is dead quiet. I can live with that. Bear in mind also that they don't stop humming without removing the battery. Storing in a watch box might magnify the humming sound. They're basically not waterproof at all, despite what it says on the back, so you have to be a little careful around water. Also as they are around 50 years old, the lugs might not be in the best condition, so a nato or bund strap might be sensible. The case will likely have a few scratches, dings, and dents. And finally, they are very small by modern standards - 34mm case width, 39mm lug-to-lug. Again the Bund strap helps. I think Vario's Mahoganny 1918 Bund with brass hardware looks perfect with a gold plated Accutron (see above).